Lee Bollinger is widely regarded as the most successful president of an American university, having consolidated Columbia’s reputation as one of the leading global institutions, while expanding its international activities. He is also a noted intellectual and scholar of freedom of speech. During a recent visit to Athens, he met with Education Minister Niki Kerameus and explored the prospect of setting up a Columbia Global Center in Greece. Nine such research outposts currently operate around the world.

In an interview with Kathimerini, Bollinger discussed the prospect but also touched upon crucial issues such as the quality of public discourse, the influence of social media and the contemporary role of universities. Asked about the impact of Donald Trump's presidency on American society, Bollinger stressed that the only thing standing between the US president and a dictatorship “is free press and the word of law.” 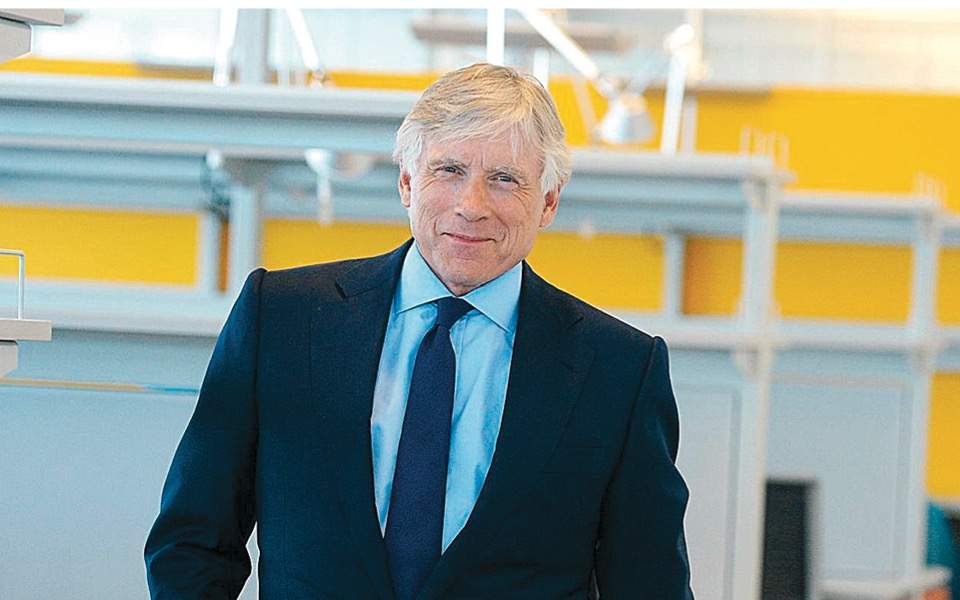 Can universities help solve global challenges and, if so, how?

Big question. The answer is yes, in a profound sense. There is nothing more important than a really great new idea. If you can discover a cure for a particular disease, that’s a major thing; if you can figure out how to remove carbon dioxide from the atmosphere, technologically, in that sense, universities can really have a very big impact on global issues. In another sense universities are a small part. A single university is a very small part of a set of institutions that can’t compete with governments and the power of governments. So I don’t want to overstate the role of universities. I have come to believe that in addition to trying to come up with important ideas, universities have a responsibility to be actors in the world. They need to contribute more than they do and I think they can have a very positive effect in two ways. One is by becoming more aware of and engaged intellectually with global issues than they are now and, another, by structuring themselves to become participants with outside institutions in doing things.

What can a university really do, besides research?

I set up something that opened two years ago called “Columbia World Projects” and the idea was what I was just talking about. Universities are great in doing research, but in terms of bringing that knowledge to bear on real problems, they let it happen. If it happens by faculty, they don’t organize themselves to do it. We are trying to organize ourselves to do it. So, in climate change, Columbia has the best group in the world in predicting short-term climate change, in very very small areas. So, they can go into a valley, in a country, and, looking at soil samples and satellite data, they can say within the next five years if there is the X probability of a drought. And if that’s true, then the ministry of agriculture should help farmers to plant this seed rather than that seed. So, we’ve taken that, the basic research, and now we have agreements with six countries to work with their ministries of agriculture and try to change the ways in which farmers operate. You can do the same with security, health and so on.

I know you have a special interest in freedom of speech. How do you think social media have affected democracy?

It’s a very very big question, I think about this a lot. We’ve gone through two periods now with the internet. One was that it would be the ideal marketplace of ideas, the thing we were looking for for centuries because everybody would be able to speak; and after that, the assumption would be, we’d have better ideas. That was the first five to eight years. Now we are in a period where we see all the dangers. There are several kinds of risk. One is the power of private companies to control what is spoken, the equivalent of state censorship. Second is the misinformation that is distributed. And the third concern is that people are distracted from serious public issues by meaningless social interactions. How can you assess whether those three together or any one of them is impacting democracy? I think it’s too early to tell. I don’t think we’ve done enough research on this. We’ve adjusted to it, to the reality. I don’t think we try to think about how to educate people about the risks. We have gone through this before. When radio and broadcasting came into existence there were a lot of fears that it would transform the way people think, and open people up to manipulation and propaganda. Today, I think we would say it was probably overstated; we always fear new technologies of communications, we always over-censor new technologies.

How do you balance between freedom of speech and protecting society from hate speech?

In the US one has to realize the idea of freedom of speech and free press go back over 200-300 years. But extreme protection of speech is only really in the last 50 years. There was no Supreme Court case on the First Amendment until 1990. It wasn’t until the 1960s that extreme speech was really protected. So, the US has tried this experiment of saying “We are going to be unbelievably tolerant of speech.” I personally have struggled with trying to understand this. My view is that there is something about being extremely tolerant of speech that has appealed to the identity of Americans and made the country feel like it’s more tolerant than it otherwise would be, and in a good way. It can stand up to bad speech and deal with it in other ways. That’s been a theme, a kind of identity. Germany has taken a very different approach, where the idea is that if you protect the speech, that will reflect weakness on your part towards that speech. Those are two different approaches. I think they both are rooted in how you think about the identity of society. One is confidence and being able to confront bad stuff, the other is the acknowledgement of a weakness. I’ve been in favor of protecting extreme speech in the US with that rationale.

Do you think the Donald Trump presidency is going to change the fabric of US democracy in any sort of irreversible way?

I am of the view that the only thing standing between Trump and a dictatorship, an authoritarian style of leadership, is free press and the word of law. The principle of the word of law. So far, I think those are standing. In terms of the values of a university built around truth, around the idea of reason and fact and so on, I think his behavior is a direct threat and challenge to that. But I don’t see that threat yet as posing an irreversible change. Thus far I see the institutions of America standing very strongly against these challenges.

Does it worry you that a lot of the world's strong leaders are on the wrong side of history, like Russia's Vladimir Putin and Turkey's Recep Tayyip Erdogan for example?

I think this is obviously one of the great questions of the time, how do we get to the point where this style of leadership seems to be flourishing. One thing is that globalization threatened a lot of people and the reaction of extreme forms of nationalism is a response to that. Similarly, globalization favored people, certain people, highly educated people, people in cities, and we did not develop policies to compensate for those who were not favored. Another theory relates to how technology is developing – largely in universities, which relates back to the very first question – and creating a dangerous environment by taking away opportunities. Various theories exist about this. I do believe, based upon my work on free speech over the years, that there is always a kind of attraction to authoritarianism in society and the mistake is that we are thinking that all of this is new and somehow is particular to the circumstances of today. There is a perpetual problem that we always must be prepared against. When I compare where we are today with where we’ve been in the US – I also believe around the world, but I focus on the US – over the past 100 years, I do not think we are in as bad a situation as we were in the Red Scare period, post-World War I, World War II, or in the McCarthy era.

What are the Columbia Global Centers and what is the idea behind them?

Well, 12 or 15 years ago, I came to the conclusion that universities in the US were at risk of being too isolated intellectually, too provincial. The world was changing, the global economy, the mingling and constant movements of people, the new internet technology making it possible for the first time to have a global communication system. All of these were raising issues that universities were not prepared to address. So, we needed to be out in the world more, see what was going on, having the conversations we should have, do the work we were supposed to do. I also felt that we couldn’t do that just by having more of the same, more student exchanges, faculty exchanges, and I also felt we couldn’t do it well by just forming branches of our campuses as was happening in Doha, Abu Dhabi and so on. We did need help in having faculty and students engaged with the world. The Global Centers were supposed to be, and are – nine of them so far – a network of offices run by very sophisticated people around the world. They help faculty members and students be out in the world. They have been very successful, very organic in the way they developed faculty interest in urban migration problems, with work in India, China and Santiago. It really has been successful, I think, in engaging Columbia with the world.

And how do you see Greece as a potential location?

I think it has rich potential. Everything I can see makes Greece almost an upper center of major issues in the region and world. Whether you’re looking at, again, climate change, movements of people, refugees, culture and the role of ideas in art at the world – if you look at the European Union and the effects of China, the US – everything you raise in the modern world, you’ll find it in Greece. So, to have a center here is very attractive.

Are you close to a decision?

Not quite yet. But we are certainly on that path